Megan Fox turned heads as she stepped outside in style alongside her three children on New Year’s Day as she and her brood did some food shopping in LA.

The actress, 36, had Noah, ten, Bodhi, eight, and Journey, six, in tow for the local outing.

It comes days after the bombshell appeared on Instagram with a cheeky post stating she’s ‘currently seeking a girlfriend.’

Over the weekend Fox caused a stir as she casually dropped in on Instagram with a provoking post.

She sat in a luxury car as she rocked a plunging purple top revealing her busty cleavage.

In the caption, she curiously wrote, ‘Currently seeking a girlfriend. Please submit applications in the DMs.’ 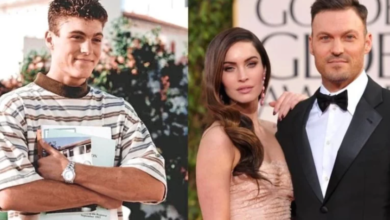 Has Brian Austin Green Continued Acting After His Divorce From Megan Fox?

‘Deadly nightshade’: Megan Fox turns up the heat as she slips into skintight purple jumpsuit for sizzling snaps