Just when you think Megan Fox and Machine Gun Kelly have delivered every possible steamy photoshoot you can imagine, they take it to the next level. This time, they are selling nail polish in the sexiest way ever.

The Megan Fox X UN/DN LAQR collection is sure to sell out this holiday season because the colors are as fierce as the snapshots of the couple. (See the photos HERE.) The first image shows Fox’s long emerald-green nails and hands seductively grasping MGK’s neck. His nails are painted a royal blue as his hands gently touch hers. Fans can only see the back of his head and his array of tattoos, but the image effectively gets the point across.

The second photo has a total True Blood vibe. Is Fox a vampire about to suck on her fiancé’s neck? We wouldn’t put it past them, but her red lips look like they are about to bite into him. The brand also made sure to put a mysterious caption to intrigue their followers into purchasing the collection. “I know you. I have known you so many times, in so many different forms, in so many different lives,” the caption reads, “(Don’t) Play With Fire—A collection by Megan Fox X UN/DN LAQR is now available ❤️‍🔥”

The ad is so effective one fan wrote, “I don’t even wear nail polish, but I need this.” Another user added, “these two want to kill us,” next to a flame emoji. UN/DN LAQR should be pretty pleased with themselves because Fox and MGK are the perfect reps for the brand and definitely evoke that “twin flame” image. 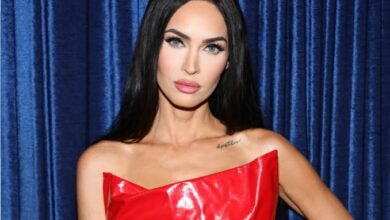 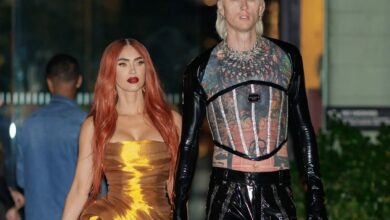 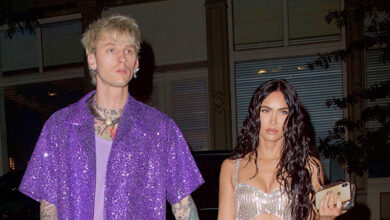 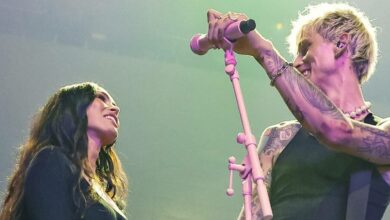