Fans of Lily Collins’ Netflix series, “Emily in Paris,” may be surprised to learn that the actress is the daughter of famous drummer Phil Collins. The musician has had many hit songs over his career as a musician like “Do You Remember” and “In the Air Tonight.”

Collins’ parents, Jill Tavelman and Phil Collins, divorced in 1996 when she was just five-years-old. After the two separated, Collins moved from London to Los Angeles to live with her mom. She released a book in 2017 called “Unfiltered: No Shame, No Regrets, Just Me,” where she opened up about her relationship with her father.

“Because my dad was often gone, I never wanted to do anything that would make him stay away even longer,” she wrote. “I became extra careful about what I said and how I said it, afraid he’d think I was angry or didn’t love him. And the truth is, I was angry. I missed him and wanted him there.”

She also talked about the relationship with her famous father to Glamour UK in January 2020 when she was asked if she ever thought about changing her surname.

“When I was younger, trying to start my journey into the entertainment world, I was told by quite a few people, ‘Well what makes you special? There’s so many different siblings and family members and people out there. Why you?” she said.

“I’m so incredibly proud of what my surname represents, for what my dad’s done. And I’m an incredibly proud daughter, but I am going on my own path, my own journey. I didn’t want to change my last name,” Collins said.

Does Lily Collins have a British accent?

Even though Collins was born in Surrey, England, she moved to Los Angeles with her mother after her parents divorce when she was five and the accent didn’t stick with her through her adult life.

She talked on the Kelly Clarkson Show about how when she was young and in school, her classmates made fun of her accent so she watched “Peter Pan” over and over again to get rid of her English accent. Eventually her accent went away. Now, as an adult, she says that she wishes that she still had the accent she had when she was younger.

Is Lily Collins in a relationship?

Collins is married to director Charlie McDowell. Rumors of their relationship started in the summer of 2019 after meeting on the set of “Gilded Rage.” They made their relationship Instagram official that year. In 2020, the two got engaged and in 2021, they got married. Collins and McDowell don’t have any children, but they did adopt a dog together in 2019.

Before that, she was linked to Taylor Lautner, Zac Efron, Jamie Campbell Bower, Thomas Cocquerel, Chris Evans and Nick Jonas.

What movies and TV shows is Lily Collins in?

Collins’ breakthrough role was when she played Collins Tuohy, daughter of Leigh Anne and Sean Tuohy (played by Sandra Bullock and Tim McGraw) in the 2009 movie “The Blind Side.” The movie is based off the life of NFL player Michael Oher.

A couple of years later, in 2011 she played Taylor Lautner’s love interest in “Abduction.” After that, she played Snow White in the movie “Mirror Mirror” with Julia Roberts.

In 2013, she was in the movie based on the book with the same title “The Mortal Instruments: City of Bones” which also starred Jamie Campbell Bower, who Collins dated on and off after meeting during the filming of the movie.

The Third Season of Emily in Paris Is Officially in Progress 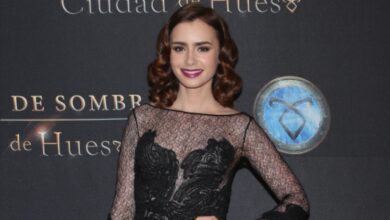 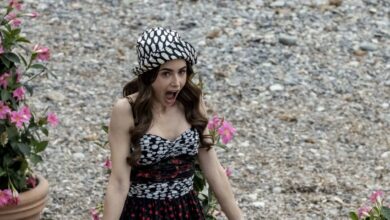