Megan Fox is best known for three things: being one of the preeminent sex symbols of the 2000s, the Transformers franchise of films, and having some thumb issues. It seems we will have to add pithy quote aficionado to her resume, as her most recent post on social media has a pretty awesome caption. Of course, this being Megan Fox’s social media, the caption accompanies a photo of the Jonah Hex star looking absolutely amazing. Check it out:

First things first, let us break down Megan Fox’s outfit of the day. In the image posted on her Instagram, she is striding toward the camera with a model-serious look on her face. She is wearing a two-piece lime green outfit; the bottom piece is lime green, high-waisted beltless trousers, while the top is an equally lime green neck tie halter top. The neckline is square cut and very low, while the knot behind her neck falls over her left shoulder in a 1970s-inspired scarf. She is carrying a lighter green clutch purse in her right hand. The nails of both of her hands are painted a deep purple, while her eyeliner is somehow both dramatic and restrained. Even though she looks to be striding across some kind of parking lot (with some blurry foliage in the background), this is one fierce look for Megan Fox.

Second, this picture of lime green Megan Fox ferocity is accompanied by a caption reading “I don’t exercise. If God had wanted me to bend over he would have put diamonds on the floor.” While a few people in the comments seem to be taking that as a statement that Megan Fox herself does not exercise, it is actually a quote from the late great comic Joan Rivers. Rivers was known for her vast catalog of jokes (quite literally: she kept a cabinet of 3×5 cards of her lifetime of jokes, reportedly numbering over a million), many of them poking fun at notions of hyper-feminity, gender roles, and society in general.

Also, considering Megan Fox is showing off some shockingly cut abs, it is safe to say that she works out. In fact, Megan Fox’s six-pack is startingly well-defined, perhaps due to her recent work in the upcoming action movie The Expendables 4. In the latest installment of Sylvester Stallone’s nostalgia series, Megan Fox joins the likes of Dolph Lundgren, Jason Statham, Harrison Ford, Tony Jaa, Jean-Claude Van Damme, Mel Gibson, and the thinking man’s action star Kelsey Grammer. Megan Fox has been increasingly pivoting towards action and thriller roles in the last several years, and it is safe to say she is in good company for this one.

This is without a doubt, not the last time we shall be checking in on Megan Fox and her strikingly well-chosen and proactively posed outfits. We are always happy whenever the star of Jennifer’s Body decides to show it off, and we will keep our eyes peeled for the next one. 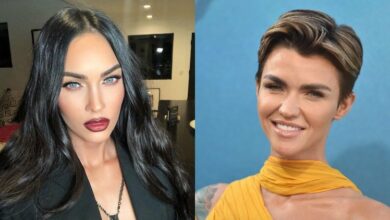 Megan Fox & Ruby Rose Are Starring in a Dark, Sexy Thriller Together 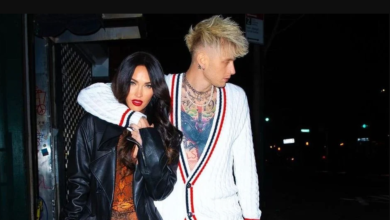 Why Is Everyone Talking About Megan Fox And Machine Gun Kelly’s British GQ Style Interview? 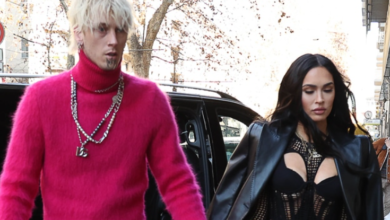 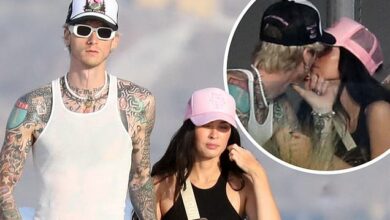