Jason Statham has established himself as one of his most recognisable action stars, known for his iconic performances in films such as The Italian Job and the Fast and Furious franchise, among others. In recent years, he has maintained his successful run by utilising his on-screen persona to attract large crowds.

From a young age, Statham showed athletic inclinations as he was interested in various disciplines – from Chinese martial arts to kickboxing. In an interview with Rotten Tomatoes, Statham spoke about some of the films which influenced him during his formative years and inspired him to become an actor.

One of the central figures who helped Statham on his action journey was the endlessly influential pioneer Bruce Lee, the man responsible for bridging the cultural chasm between the East and the West. Statham said: “If we want to talk about the movies that have made an impact in what I do in the action realm — Bruce Lee in Enter the Dragon.”

“I’ve watched that countless times,” the actor added while emphasising the impact of Lee. “That is a standalone pioneer in action movies, and anyone that was inspired by Bruce Lee…I’m sure everyone that has ever done an action movie has just drooled over how full of talent Bruce Lee was, and how unique he was.”

Statham also expressed his love for Francis Ford Coppola’s The Godfather Trilogy: “It’s just quality at its best. Fantastic writing, an amazing caliber of acting; just beautiful, everything about it. The details of the clothes, the sets — just a masterpiece. Again, I can watch any of the trilogy time and time again.”

Through his selections, Statham also revealed his undying love for Paul Newman, who became one of his primary sources of inspiration. According to Statham, Newman’s irresistible charm on the screen and his iconic persona left indelible impressions on his mind.

Statham said: “Another favourite movie is Butch Cassidy and the Sundance Kid. Again, I can watch that movie a hundred times and never get tired. I think the pairing of Redford and Newman is amazing. Paul Newman and Robert Redford are just so good.”

How Will Fast & Furious End? Our Biggest Theories & Predictions

The Expendables 4 is 80% Jason Statham, According to Sylvester Stallone 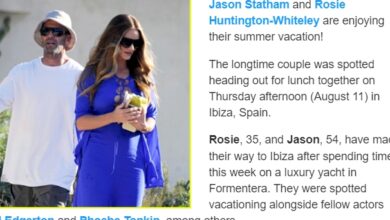