Megan Fox is known for being a bit of a wild child during her time in the public eye. The actress is not afraid to show off her scandalous side and express her sexuality. Fox may need a parental control warning on her social media because she does not hold back. When it comes to posting pictures with her boo or new gal pal Kourtney Kardashian, all bets are off.

Megan Fox is currently in a relationship with rapper Machine Gun Kelly. Their relationship has struck the media by storm taking over the tabloids. The pair have dated for over a year after Megan and her ex-husband Brian Austin Green called it quits. During their ten years of marriage, Megan Fox became a bit more conservative. Now that she’s with MGK, she has been the topic of conversation and not always in a positive way.

Megan Fox posted a mirror selfie in September 2021 of herself leaning on an island table at an Airbnb. She captioned the photo, “When I tell you that the table at this air bnb saw some things,” … not so subtle. Fans were quick to criticize the sexually open couple and went into full-on attack mode. They commented, “they know they can just text each other with this stuff, right?” “Some things should stay private for a reason,” as a second person said, while another simply added, “cringe.”

“When your relationship has no depth so you have to compensate on social media,” another wrote. MGK left a comment on his girlfriend’s picture writing, “I’m really glad that’s not our table anymore.” It seems neither Megan nor MGK are bothered by what people say since they continuously post raunchy stuff on social media.

According to a story in Paper magazine, “The Transformers star stunned at the 2021 iHeartRadio Music Awards in a skin-tight, hot pink jumpsuit and, naturally, wanted to post the incredible look to her Instagram feed. And while the caption jokingly referred to herself as “Daddy Issues Barbie,” it turns out that MGK’s response was the thing that actually raised eyebrows.”

Machine Gun Kelly commented, “Daddy loves you,” which quickly went from playful fun to cringe. Many fans encouraged him to delete the comment altogether. It’s no surprise that the twin flames are constantly causing a stir on Instagram.

During Megan Fox and Machine Gun Kelly’s photoshoot, there was a gun involved. The power couple graced the Autumn/Winter 2021 issue of British GQ Style magazine. Fox is pictured in the nude and pointing a gun at her twin flame. This isn’t the first and won’t be the last time you see Megan Fox in a sultry photoshoot. Fans were stunned when the photos initially came out and a cocked gun was pointed at MGKs private area. But then again… it is Megan Fox and MGK.

Megan wrote on Instagram, “The tale of two outcasts and star crossed lovers caught in the throes of a torrid, solar flare of a romance featuring: feverish obsession, guns, addiction, shamans, lots of blood, general mayhem, therapy, tantric night terrors, binding rituals, chakra sound baths, psychedelic hallucinations, organic smoothies and the kind of sex that would make Lucifer clutch his rosary.” You better believe that their love is bulletproof.

Megan Fox posed with her new BFF Kourtney Kardashian in a nearly-nude photoshoot for Kim Kardashian’s company. Kim Kardashian is a smart woman to profit off of this new threat of power duos. Kourtney Kardashian and Travis Barker as well as Megan Fox and Machine Gun Kelly have been nonstop in the press. Kim recruited Fox and her sister to model her new SKIMS line. The collab was as raunchy as ever and definitely, turned heads.

2 Flesh Of My Blood

On numerous occasions, MGK and Fox have referred to one another as twin flames. They have shared with the world that MGK wears a necklace with a drop of Megan’s blood. It’s not every day you hear that a couple is wearing the other’s blood like a diamond ring. The story behind the blood necklace comes from the rapper freaking out when Megan had to travel.

“Well, she was actually going out of town to film a movie, and this was really new in our relationship,” he said. “I didn’t have a passport either, so she was going out to Bulgaria, and so I was kinda freaking out like, ‘You’re gonna leave and I can’t even come see you.'” “I mean, some people give a handkerchief to their partner,” Colson went on. “She gave me her DNA.”

Finally, the steamiest bathroom picture of the year 2021, and it involves this crazy foursome. Scroll the right to see the photo that literally broke Instagram on September 14, 2021. Kourtney Kardashian and Travis Barker accompanied their buddies to the 2021 MTV VMAs. During a bathroom break, the power couples decided to tongue kiss and literally break the social media platform. Megan Fox may be as controversial as it gets when it comes to her posting on Instagram! 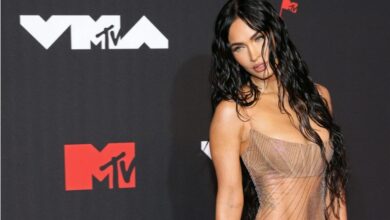 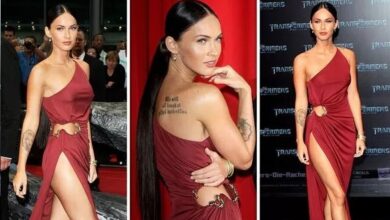 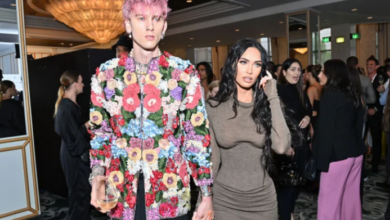 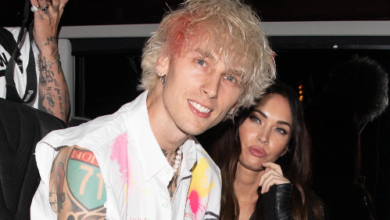