There’s no doubt that Wonder Woman came in and smashed all of the box office records in 2017, and there were a lot of firsts with the film. Not only was it the highest-grossing D.C. Extended Universe superhero film at the time, but it was also the biggest and most successful superhero origin story and the first extremely successful superhero film directed by a woman. The Amazonian warrior princess paved the way for a lot of women-led superhero films, but she also paved the way for how actresses prepare to be these otherworldly, extremely powerful heroines on screen as well.

Before Wonder Woman, no other actress had taken on as truly a physical training experience as Gal Gadot did in preparing and transforming into Wonder Woman, easily the most important female superhero in D.C. and comic book history in general. Gadot already had the beauty, but the Israeli actress really had to step it up a notch to become the female equivalent to Superman, and that’s what she did.

Before Wonder Woman hit theaters though, Gadot was set to tease her upcoming origin film by starring in Batman v. Superman: Dawn of Justice, so that’s really when Gadot first stepped into her training program. Since her modeling career made her body lean, the only thing left for trainers to really do was to get her body into fighting shape and build muscle. To help her get in shape, Gadot went to trainers Hayley Bradley and Mark Twight, founder of Gym Jones, who are skilled in transforming actors into fighting machines.

Before Batman v. Superman came out, InStyle’s senior editor, Christina Shanahan, went on a crash course in the same training Gadot got to gear up for her role. Right off the bat, Twight sent her a message saying, “Poor nutrition and inadequate sleep reduce the effectiveness of training by 20 to 30 percent,” drink a gallon of water a day, and “to balance each meal with equal amounts of protein and greens.” Shanahan said that after the program, “which blended basic pull-ups, squats, and ball throws with cardio intervals using the stationary bike and rowing machine—two minutes full-force, then two minutes of active rest—plus weight-lifting challenges,” she had a “new respect for Wonder Woman” because she could now deadlift her body weight, lost 5 pounds and “had a tighter core, visible muscle definition in my arms and legs.”

At the end of the month-long program, Shanahan said you didn’t need big equipment to become a sculpted as Wonder Woman though. It was a simple as; “Each day, do 30 seconds of push-ups followed by a 30-second plank hold. Repeat four times.” What Gadot did in training though was a little harder, because according to HighSnobriety, she “trained in sword fighting, Brazilian jiu-jitsu, Capoeira and Kung-Fu.” These were things that Gadot was less familiar with, having already been trained in fighting after she served in the Israeli army for two years (she was also a basketball player and hip-hop dancer at one point, along with being crowned Miss Israel in 2004).

When it came time for Wonder Woman, though, it took her six months of preparation, reports Elle, and she worked out six hours a day. “I did two hours gym work, two hours fight choreography, and two hours horseback riding. Which is super hard,” Gadot said on Live with Kelly and Ryan.

Along with all the working out, Gadot also has a balanced diet, which was half protein half greens, greens being her favorite. “I’m a foodie and I love to experience food, but at the same time I look at food as fuel and I want to give the best to my body,” Gadot told Harper’s Bazaar. “So of course I have my bad things that I eat like burgers or ice cream with chocolate. I don’t restrict myself, I can eat everything. It’s all a matter of measurements and quantity of the food; just enjoy your food.”

Even though Gadot has to keep that Wonder Woman physique, her life isn’t dictated by working out. “I enjoy being outside and not being stuck necessarily in the gym,” Gadot told SELF. “I love doing things that make me feel vital and vibrant and healthy and alive, even if it doesn’t really feel like a ‘workout.'” She loves Pilates, swimming, and even rock climbing, but the one exercise she absolutely loves to do whether in full training mode or just in her hotel room is planking.

“I love doing planks. Planks are my go-to,” she continued. “When I travel and don’t feel like going down to the hotel gym, I just do a workout in my room, and planks are a big part of that.” Planks are pretty much the one thing you can do to make your core look as great as Gadot’s.

The great thing about most of Gadot’s training is that people can do it at home, or wherever they are and become just as lean and fit. The training and lifestyle she has now adopted since becoming Wonder Woman is that it’s all about what makes you feel good. Yes, Gadot was on (and still is) a tight regimen but people at home can still achieve those goals by just working out and doing the exercises for just one hour a day. Remember, Gadot couldn’t even do one pull-up when she first started, and she was also five months pregnant during much of the shooting of Wonder Woman. So you already have a head start if you’re not pregnant. It should be a piece of cake…hopefully. 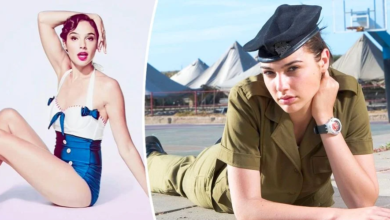 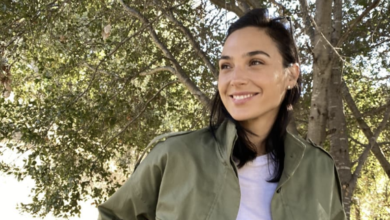 Gal Gadot, 36, Shows Off Her Killer Arms And Legs In A Cute Polka Dot Dress In A New Instagram Video 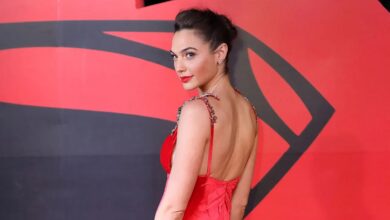 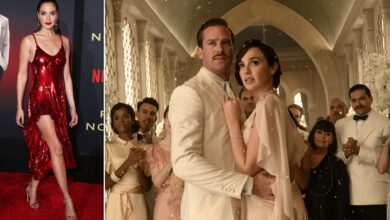