And while the Italian nuptials promised an opportunity for standout sartorial displays, some of the extravagant looks did not come without their difficulties, as 24-year-old Kylie Jenner documented on her Instagram Story.

On Sunday, the cosmetics company owner shared a video of her older sister Kendall, 26, trying to navigate a steep staircase in a skintight floral dress.

As she made her way up the stairs, Kylie could be heard laughing before uttering: ‘S**t these stairs are crazy!’

Mother-of-two Kylie also took to her Story to give a glimpse of the picturesque scenery in Portofino.

Kylie also shared a clip of her dancing with Kendall to her TikTok account on Sunday.

The social media personality and her sister were seen enjoying their older half-sister Kourtney’s wedding in the video, and the former made a point of taking a shot on camera while spending time in front of the cameras.

The influencer also wrote a short message in her post’s caption where she referred to Kendall as her ‘cucumber girl,’ which served as a reference to an episode of The Kardashians where the model appeared to have difficulty in cutting a vegetable.

It was Kourtney and Travis’ third time tying to knot, and the 43-year-old bride switched the white minidress she wore at the wedding ceremony for a black version at the reception.

She put her lithe legs on display as her husband Travis got down on his knees to for the garter toss in a video posted by his 16-year-old daughter Alabama.

As Kourtney sat down on a in front of a wall decorated with red twinkle lights, her husband took off the garter belt off her leg with his teeth and toss it to a crowd of bachelors.

The Blink-182 drummer was later seen with his arms wrapped around the mother-of-three from behind as they slow danced to 1960 Etta James classic At Last.

The couple’s close friend Machine Gun Kelly also shared a recording of the couple, which showed Travis and Kourtney in matching white leather jackets, with hers bearing the name ‘Mrs. Barker’ across the back. 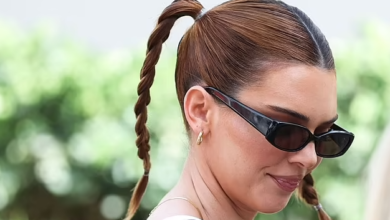 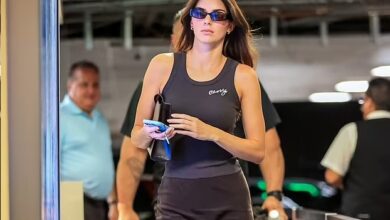 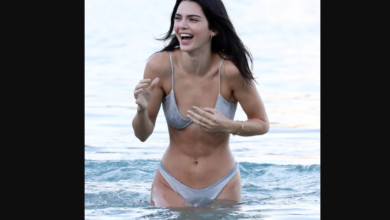 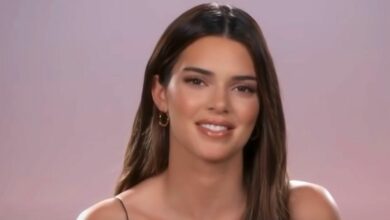