Having parents who are top Hollywood stars, the children of Angelina Jolie and Brad Pitt always receive the attention of the media, and the public. Not long ago, the 16-year-old daughter – Shiloh Jolie-Pitt of Angelina Jolie’s family surprised the world with her transformation from tomboy style to feminine, graceful, and increasingly beautiful. However, besides that, there is another character that also makes many people impressed, that is the youngest sister, Vivienne Jolie-Pitt.

Remember in 2014, the movie Maleficent starring Angelina Jolie attracted the attention of the audience because of the participation of the “excellent” cast, including the youngest daughter of the female star. . Vivienne Jolie-Pitt made a strong impression with her lovely appearance and cleverly transformed herself into the childhood princess Aurora. In particular, the Pitt family is also a “savior” character for the film crew.

Accordingly, the reason that Vivienne Jolie-Pitt appeared in Maleficent was because at that time, Angelina Jolie’s “Dark Fairy” image was so realistic that the child actors were afraid and did not dare to approach her. The only daughter of the actress, Vivienne, then only 4 years old, was fearless, ready to approach her mother, touch the Maleficent costume.

Sharing about her daughter’s reluctant role, Angelina Jolie told Entertainment Weekly that a daughter was the perfect choice at that time: “No three or four-year-old child dared to approach me. While the requirement of the work is to find a child actor who is completely fearless when he sees scary horns, eyes and claws. Therefore, Vivienne is the perfect choice.”

It is known that Vivienne Jolie-Pitt is living with her mother Angelina Jolie and her brothers and sisters. Despite being the child of a famous couple, Angelina’s daughter is still very simple. Besides studying, Vivienne was also taken by her mother to many big and small events, not afraid to appear in front of the camera. And every time she appears, she receives a lot of attention from the public, and fans are looking forward to Vivienne’s return in a new role.

At the red carpet of the premiere of the movie “Eternals”, Vivienne Jolie-Pitt (at that time she was 13 years old) appeared extremely beautiful and charming when wearing a white dress, with a side-parted bob, and a sweet hair clip. Sweet and luxurious. The little girl who played the role of Princess Aurora (childhood) in “Dark Fairy” is now grown up, possessing outstanding visuals. Vivienne Jolie-Pitt’s beauty has a perfect blend of the beauties of her father and mother, promising to become a great beauty in the future.

Notable as well as visual and hair style, is the extremely stylish fashion style of Angelina Jolie’s daughter – Brad Pitt. Overall, Vivienne Jolie-Pitt is not too passionate about dresses. She pursues a healthy and active style, with items such as: T-shirts, jeans, jogger pants, sports shoes…

Choosing basic fashion, but Vivienne Jolie-Pitt still knows how to make her style stand out and have accents. Specifically, Vivienne Jolie-Pitt not only wears a solid color t-shirt, she likes patterned shirts, and skillfully combines to complete the outfit in harmony and “quality”.

Occasionally, Vivienne Jolie-Pitt will change the style with lighter outfits, such as sleeveless tops that press the waist, combined with jeans, loafers, or T-shirts with short skirts and white sneakers. These are all very pretty and sweet ways to dress, and at the same time show Vivienne Jolie-Pitt’s ability to transform flexible and stylish styles.

The style of going to the event of Vivienne Jolie-Pitt is also very remarkable. Angelina Jolie’s daughter often dresses up in a streamlined way with a suit, a neutral plain skirt, a youthful and dynamic jumpsuit… And even though her clothes are not picky, Vivienne Jolie-Pitt always shines with a stylish look. , beautiful beauty like an angel. It can be said that Vivienne Jolie-Pitt is not only a future beauty, but also a promising fashionista when she was dressed up like this from a young age.

Now, after many years, Vivienne Jolie-Pitt from a girl with a cute appearance, has now become an extremely beautiful girl. 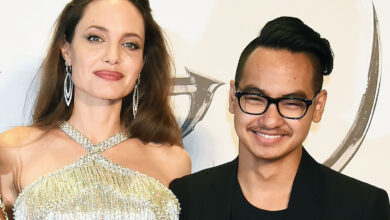 The Untold Truth Of Maddox Jolie-Pitt 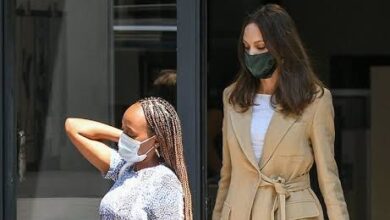 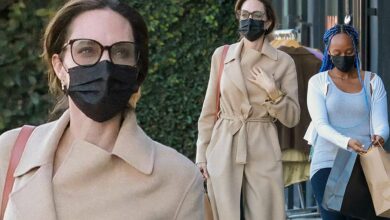 Angelina Jolie and daughter Zahara, 17, look blissful while on a shopping spree at Foxtail Salon in Los Angeles