She no doubt worked up an appetite walking in two Fashion Week shows on Thursday, alongside her sister Bella Hadid.

And Gigi Hadid was seen leaving L’Avenue after dinner in the French capital, after a busy day on the runway for Isabel Marant and Ludovic de Saint Sernin.

The model, 26, who was joined by her sister and her boyfriend Marc Kalman, looked seriously cool in a skintight floral jumpsuit.

The one-piece, which was covered in yellow and black flowers, was layered with a matching long jacket in the same print.

Gigi accessorised the ensemble with a pair of black stilettos and a silver chain necklace and hoop earrings.

The mother of one opted for cool pallet of yellow make-up and wore her blonde lock in a loose, carefree style.

Earlier in the day, Gigi put on a leggy display as she strutted her stuff at Ludovic de Saint Sernin’s show for Paris Fashion Week.

She showed off her fashion credentials as she slipped in to a chocolate brown shirt dress from the designer’s ready-to-wear collection.

Putting on a leggy display in the thigh-skimming number, it was left partially unbuttoned at the neckline and the cuffs for a relaxed fit.

Gigi led the show as a flurry of models followed behind her in matchy earthy toned ensembles.

Elsewhere, her sister Bella left almost nothing to the imagination as she took to the runway.

The model, 25, looked incredible as she went braless in a black sheer dress that highlighted her jaw-dropping figure.

The sleeveless garment, part of the designer’s ready-to-wear collection, featured a high collar and a flowing black pleated train. 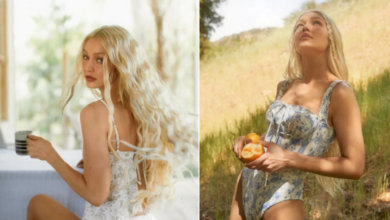 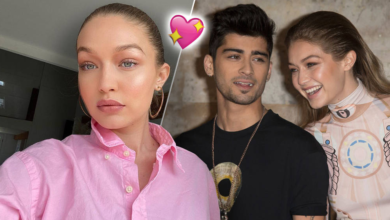 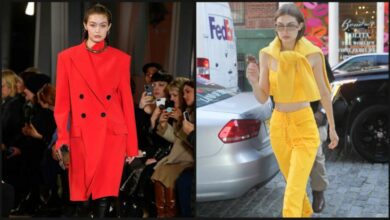 Gigi Hadid In Bright Red Vs Bright Yellow: Which Monochrome Look Is Fabulous? 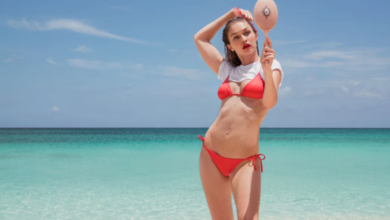 The One Travel Tip Gigi Hadid Swears By