With the award season officially coming to a close with the 92nd Academy Awards, we recollect all the iconic fashion moments witnessed on the Oscars red carpet. There is no second guessing that stars always shine their very best at the Academy Awards. With regulars such as Nicole Kidman, Meryl Streep, Jennifer Aniston and Charlize Theron throwing some major fashion inspiration our way, the Oscars red carpet is the one to watch. From classic red carpet glamour- including lush taffeta gowns, satin opera gloves and Grecian silhouettes to outfits that leave us puzzled, the fashion worn by the attendees is equivalent to the awards won.

The Ain’t Your Mama singer/songwriter usually can be seen sporting edgy and bold looks but this wasn’t her go to vibe since the very beginning. When JLo, a downtown girl who skyrocketed to success, in the early years opted for soft and sultry looks. Back in 2002, she graced the Oscars red carpet in this ultra-feminine number by Versace. The blush pink off shoulder gown featured ruched detailing at the waist and cascaded in a pleated train. What made this look a winner is Jennifer Lopez’s 90’s inspired curly hairdo. Pulling a section of her hair back, she let down her playful locks. With a string of pearls around her neck Jenny from the block topped off her look!

At the 2002 Academy Awards, Julia Roberts climbed up the stairs to receive her very first Oscar for Erin Brockovich. Apart from her hilarious speech, the black vintage Valentino was also the talk of the town. The gown was originally made in 1992 and debuted on Valentino’s Haute Couture runway. The elegant body-sculpting gown featured an organza train with white satin stripes. The Eat,Pray,Love actress wore her hair in a classy hairdo and dainty earrings. Thank God she took some time to make her dress look pretty!

Make way for His Majesty! At the 2019 Oscars, Billy Porter pushed the stern boundaries of femininity and masculinity in all the right ways. He emerged on the red carpet in a custom made velvet black tuxedo gown by Christian Siriano. The gown which started as a classic tuxedo culminated in a huge ball gown. The black tuxedo featured a satin peak lapel detailing and the sleeves sprouted out ruffles.

Business in the front and party in the back! At the 2007 Oscars, Nicole Kidman opted for a sultry red Balenciaga gown that featured a pretty big bow behind her neck. The straight fit gown had a halter neckline finished with a red metallic strip. The big bow that took center stage culminated in a sleek train. Pairing her dress with a side swept locks and fine-cut diamond bracelets, she walked into the best dressed list.

The iconic pink voluminous dress that Paltrow wore to receive her first Oscar featured all the 90’s trend all together. The simple yet chic dress was a time capsule for a decade marked by minimalism and fantasy. Though this look is considered as her best fashion moment, this pristine white Tom Ford gown can’t be overlooked. Just like a Roman goddess, the founder of GOOP walked up the red carpet like a modern-day royal in an exquisite white number. The gown featured a one shoulder neckline and an elegant cape. She topped off her look with a statement bracelet and ring.

Did we love ‘Angie leg’ more than the actual dress? Maybe we did. At the 2012 Academy Awards, the stunner opted for a ebony coloured off-shoulder gown by the Italian house Versace. But more than her dress and her bold red lips, her leg peeking through the thigh high slit made headlines. The mother of six, topped off her ultra-sensual look with blown out brown locks.

It’s not everyday that you see an Oscar attendee in a jumpsuit on the red carpet. But Gaga has always opted for unconventional sartorial choices. Is it even Gaga enough if it isn’t eccentric? At the 2016 Oscars, Lady Gaga made jaws drop as she walked up in a white jumpsuit designed by Brandon Maxwell. The off-shoulder number culminated in a regal flare. The Born This Way singer completed her minimal look with old school Hollywood curls.

Unlike the movie which she was nominated for, Monster, Charlize Theron glided like an angel on the 2007 Oscars red carpet. She wore a slinky ivory embellished number by Gucci. The intricately embellished number was paired with diamond encrusted heels. She also opted for a pair of fine-cut diamond earrings and a bracelet. The actress pulled off the sensual dress with a retro chic hairdo.

It’s either black or red. At the 2013 Academy Awards, Jennifer Aniston showed up in a red taffeta strapless gown by the Italian designer Valentino. Chic, simple and elegant is Jennifer’s red carpet mantra and it works almost everytime. We absolutely love this simple yet glamorous gown. The F.R.I.E.N.D.S. star teamed her gown with a red arm candy and finely cut diamond bangles.

Known for her eclectic sartorial choices- think the Versace safety pin dress, Elizabeth Hurley is quite the stunner on the red carpet. At the 1995 Academy Awards, Elizabeth gave a major update to the classic LWD as she opted for a cheeky and intricately embellished number by no other than Versace. She paired her ankle length dress with crystal embellished heels and a clutch made of the same fabric.

How can we even talk about the iconic fashion moments on the Oscars red carpet without mentioning Audrey Hepburn? The epitome of grace and elegance. Ditching the classic ball gown, she opted for a below the knee white dress designed by Hubert de Givenchy. The boat neck gown which later was named by Givenchy as ‘decollete Sabrina’ was embellished with white flowers. This iconic design still stands the test of time.

Which iconic fashion moment from the Oscars red carpet is your favourite? Comment below and let us know. 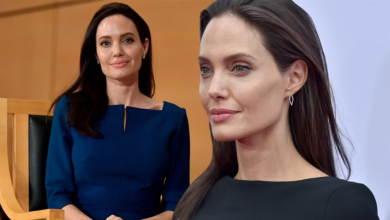 How Angelina Jolie Made A Full Recovery From Bell’s Palsy 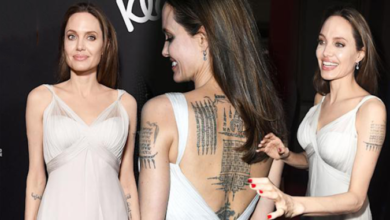 Meanings of 20 tattoos on Angelina Jolie’s body. If you’re her fan, don’t miss this post 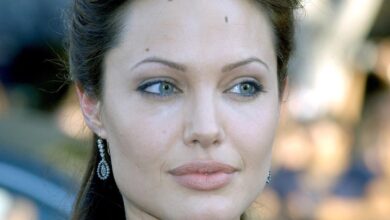 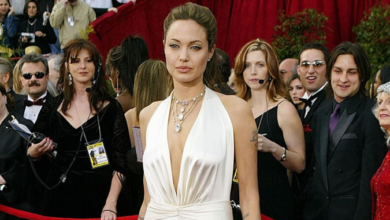