Gigi Hadid couldn’t have looked any happier spending time with her family on Tuesday.

The runway model, 26, was spotted with her mother Yolanda Hadid and daughter Khai in New York City.

Gigi flashed a wide smile as she popped her head out of the doorway, seemingly chatting with someone outside.

The star looked lovely with her blonde hair scraped back into a no-fuss bun with an array of colorful butterfly pins clipped into her tresses.

She stayed warm wearing a thick knitted grey cardigan over her white T-shirt.

The beauty enjoyed some time off from mommy duties as Yolanda took her granddaughter out for a stroll.

The former model was joined by her long-time boyfriend, Joseph Jingoli.

Yolanda could not contain her happiness as she enjoyed some quality time with her stylish granddaughter.

She even enjoyed a spot of shopping at Louis Vuitton, where she emerged with some new designer goodies.

The former model held hands with the tot as she strolled down the sidewalk with her shopping bag in hand.

Yolanda braved the cold in a midnight blue fur coat, leggings, and leather shoes while her granddaughter sported a fluffy ‘Paris’ onesie.

The outing comes just a day before her aunt Ghada Hadid passed away on Wednesday morning in Washington, DC.

Ghada’s brother Mohamed Hadid, 73 – who is the father of Gigi, Bella, and Anwar Hadid – shared the news of her death on social media.

The native of Palestine had suffered a heart attack this week after coming down with COVID-19 and pneumonia, which put her in Intensive Care unit.

Ghada’s brother Mohamed Hadid, 73 – whom shares his three children with his ex-wife, reality TV star Yolanda Hadid – shared the news of her death on social media.

‘My beautiful eldest sister passed,’ the businessman who lives in Los Angeles posted on social media.

‘My sister may God open the Gates of Heaven wide open and give Ghada an easy entry you will be among the most beautiful Palestinians in heaven Momma baba Magida Maha our beloved cousin Zuhair.’

The Real Housewives Of Beverly Hills guest star added, ‘You have been a voice for peace. You left legacy @linahadid to fight for us all. We love you.’

Mohamed and Bella had traveled to Washington DC before her death to say a last goodbye.

Before her passing Bella, 25, Gigi and Mohamed all asked their fans for prayers.

‘Please pray for our Auntie Ghada,’ said Bella on Instagram Stories as she shared images with the woman. ‘I love you,’ she added.

One saw Bella hugging Ghada in front of a birthday cake.

And another shot showed Ghada with Mohamed and two other sisters in formal clothing for a black and white shot.

A shot with Mohamed and Ghada was also shared as Bella wrote over the post, ‘My baba and His big sister Ghada.’ She added a red heart emoji. 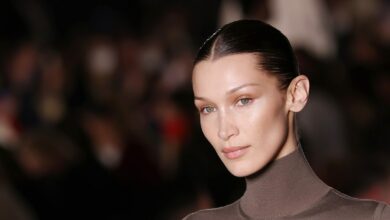 This Must Be Bella Hadid’s Most ’90s Beauty Look Yet 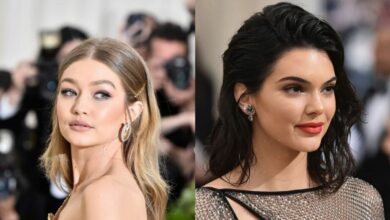 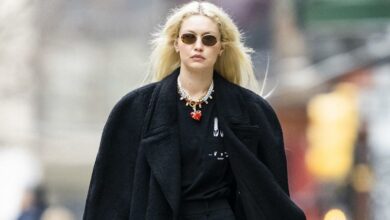 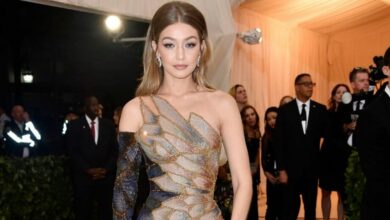