Hollywood actress Angelina Jolie became a mum for the 1st time when she adopted a baby boy from Cambodia in March 2002. Originally named Rath Vibol, Angelina re-named her adopted son Maddox Chivan after she adopted him from his orphanage in Battambang, Cambodia.

Although Angelina was married to fellow actor Billy Bob Thornton at the time and they announced the adoption news together, Angelina formally adopted Maddox as a single parent. The couple split 3 months after the adoption was finalised.

Pic: Brad with Pax and Maddox at the Venice Film Festival in 2008

Angelina was a single mum for 3 years and then in 2005, on the film set of Mr & Mrs Smith, rumours started circulating about Angelina forming a close relationship with Brad Pitt – who was married to Friends actress Jennifer Aniston at the time. Following Brad’s divorce to Jennifer and his relationship with Angelina going public, the Hollywood power couple ‘Brangelina’ brand was born.

In 2005, Angelina decided to adopt her 2nd child, an Ethiopian girl named Zahara. The baby girl was born on 8 January 2005, and adopted by Angelina when she was 6 months old.

Angelina first met Zahara (who was named Yemsrach by her birth mother and then changed to Tena Adam by the orphange) at the Wide Horizons For Children orphanage in Addis Ababa, Ethiopia, and applied for adoption. There was a slight set back after Zahara was brought home to the US, as her birth mother, who they thought had died during childbirth, surfaced, saying she had Zahara put in the orphanage because she was too poor to look after her. However, she later retracted her claims and gave her blessing for the adoption.

Although Angelina’s relationship with Brad was now public, Angelina adopted Zahara as a single parent (even though Brad was present at the paper signing and she has hinted that the adoption was a joint decision with Brad). In January 2006, Brad officially adopted Angelina’s 2 children Maddox and Zahara and their surnames were changed to Jolie-Pitt.

Angelina and Brad have Shiloh

Already nicknamed the ‘rainbow family’, Brad and Angelina announced that they were expecting their 1st biological child together soon after Brad’s adoption of Maddox and Zahara was finalised.

Angelina gave birth to a daughter they named Shiloh Nouvel on 27 May 2006, in Swakopmund, Namibia. The arrival of the first Jolie-Pitt biological child caused an excited flurry with fans, all wondering what the baby would look like due to their reputation as the world’s most attractive parents.

The first pictures of Shiloh were allegedly sold for $4 million to American magazine, People, and for $3.5 million to the UK’s magazine, Hello! The picture fees were donated to an undisclosed charity of Brad and Angelina’s choice.

Pic: Brad with Pax, Shiloh, Maddox plus Brad’s parents Jane and Wiliam at the LA premiere of Unbroken in 2014

Shiloh has her own waxwork in Madame Tussauds, New York from when she was 2 months old – the first celeb baby to be re-created in wax.

Shiloh has grown up as a tomboy, despite her glamorous mum and girly sister Zahara. After insisting that her family call her John, Shiloh likes to wear boys’ clothes – with dad Brad recently splashing out $10,000 on boys clothes for her – and demanded a soldier-themed birthday party just like her brothers.

In March 2007, Angelina and Brad announced they were adopting a 3-year-old Vietnamese boy named Pax Thien. Pax was born in November 2003 and lived in the Tam Binh orphange in Ho Chi Minh City, Vietnam.

His name means ‘Peaceful Sky’ with Pax meaning peace in Latin and Thien being sky in Vietnamese, although his original birth name was Pham Quang Sang. It’s believed that the name Pax was suggested to Angelina by her mother, just before she passed away.

Angelina and Brad have Knox and Vivienne

Angelina revealed her 2nd pregnancy during the Cannes Film Festival in 2008, by gliding down the red carpet with a burgeoning baby bump. The couple confirmed later that they were expecting twins and they arrived into the world on 12 July 2008 at the Lenval hospital in Nice, France. The boy and girl twins were named Knox Leon and Vivienne Marcheline (in honour of Angelina’s mum Marcheline Bertrand who died in 2007).

The first photos of the twins were reported to have been sold for $14 million – the most expensive celebrity baby pictures at the time. Again, the fees were donated to charity – this time to the Jolie/Pitt Foundation.

Soon after, a series of photographs taken by Brad of Angelina appeared in America’s W magazine. They featured black and white portraits of the Jolie-Pitt family, as well as one of Angelina seemingly breastfeeding. And speaking of breastfeeding, there was also a statue of Angelina made by artist Daniel Edwards, showing Angelina breastfeeding her twins.

Pic: Brad with Knox at the British Grand Prix in 2015

The pair married in France in 2014, with Maddox and Pax walking them down the aisle, Zahara and Vivienne as flower girls and Shiloh and Knox as ring bearers.

The A-list couple are constantly the subject of rumours. Over the years, Angelina has been reportedly pregnant or planning child no 7 many times over.

Angelina has 6 sets of geographical coordinates tattooed on her upper left arm showing the birth places of all her children. When she got a 7th tattoo, it sparked rumours that she was planning to adopt again.

On 20 September 2016, it was announced that Angelina had filed for divorce from Brad.

“I am very saddened by this, but what matters most now is the well-being of our kids,” Brad apparently said in a statement to People. According to Angelina’s lawyer, Robert Offer, the decision to divorce was made “for the health of the family.” 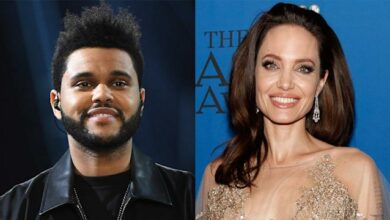 Angelina Jolie Is the ‘Ultimate Muse’ for The Weeknd Amid Romance Rumors: ‘She Certainly Has Inspired Him’ 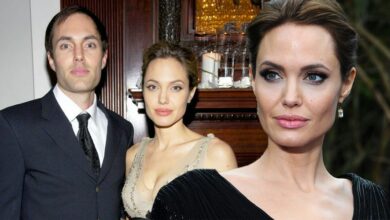 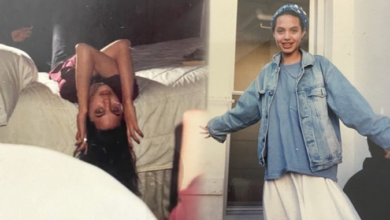 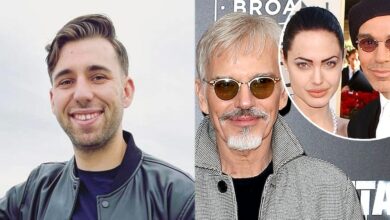