Megan Fox stripped down to a lacy set of black lingerie in the sizzling new trailer for the brain damage comedy Big Gold Brick.

The 35-year-old actress is playing Jacqueline, the unsatisfied wife of the character Floyd played by 65-year-old Andy Garcia.

Floyd hits aspiring writer Samuel (Emory Cohen) with his car early in the trailer – causing the young man to soar through the air and suffer head trauma.

Samuel is seen in the hospital covered with injuries after the crash after which Floyd remarks: ‘It’s a miracle that the kid’s alive.’

A doctor reveals the victim ‘may experience mood swings, agitation, confusion’ as a result of the injuries to his brain.

Floyd’s response appears to be to ask: ‘Can you smoke in here?’ the doctor answers in the negative despite lighting up a cigarette himself.

Samuel is then welcomed into Floyd’s home and offered the chance to write the older man’s biography.

In fact Floyd makes the offer while visiting Samuel in his hospital bed, bringing a bouquet to try and break the ice.

‘What I’m proposing is that you come and stay with my family until you get yourself back on your feet,’ Floyd says.

When Samuel enters the house he is introduced to Jacqueline – who is a leggy sensation as she saunters into the hall in a clinging pencil skirt.

Samuel stares agog at her as his voiceover declares her ‘Floyd’s second wife. She was a successful attorney.’

Lily appears to be a concert violinist as she is seen onstage with her instrument while decked out in a glamorous scarlet frock befitting an opera soprano.

However her temper seems to be getting in the way of her professionalism as at one point she slams the violin onto the stage and smears her lipstick across her face.

Floyd also introduces Samuel to his apparently teenage son, ‘my boy Eddie’, who himself insists on being called ‘Edward.’

Edward, played by Leonidas Castrounis, has long hair and a sullen demeanor that causes Samuel to remark: ‘He reminded me of myself.’

The teen at one point walks around with a dead rabbit and – in what may be some sort of dream sequence – is seen grinning mischievously in front of a burning house.

Over a family dinner Jacqueline asks about the book but Floyd fobs her off by saying with a grin that the project is a ‘secret,’ much to Samuel’s surprise.

A voice sounds from the other side of the room and Samuel realizes he is hallucinating that a Santa Claus toy is talking to him.

Samuel’s mental problems begin to torment him to the point he lays in bed screaming and clutching his head.

Various hints about Floyd’s murky past begin to appear in front of Samuel, who attempts to lip read one of his conversations from a distance.

In one scene Samuel enters his room only to see Jacqueline sprawled across his bed in her slinky black lingerie under an open silk robe. 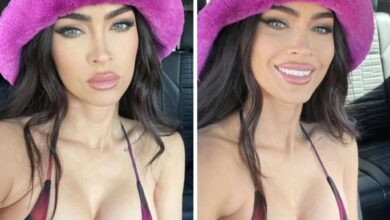 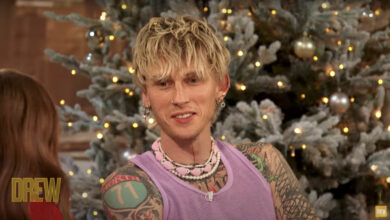