The Walking Dead: World Beyond is the shortest-lived of The Walking Dead spin-offs to date, ending after its two-season run. The series promised a fresh perspective on the post-apocalyptic world of the show’s universe, following a group of young people who never, or barely, knew the world before. In addition, fans get to learn more about the mysterious CRM (Civic Republic Military), which took off with Rick Grimes in its parent series.

Even if the show wasn’t the most popular in the franchise, the finale was worth a watch because it revealed interesting details about how the virus began. It also presented possible opportunities for crossovers with upcoming shows and movies.

9. Silas Is Undercover At The CRM

Silas, a character that fans loved on Walking Dead: World Beyond, had an interesting end. He found a way to save himself, but it required that he leave everyone and everything he knew behind and go deep undercover in the CRM. There’s a lot more story to tell with him, which makes him reappearing a likely possibility.

The ending left the story open-ended for his character, including Jadis’ suspicions that his intentions weren’t pure but her belief she could turn him to the dark side such that he actually became one of them, fighting for the cause.

It happened in a flash, ironically as Elton jumped in to save Hope from being bit. He was bitten on the arm, but his friends saved him by cutting off the limb and sewing him up.

She sacrificed herself in the end, with her final words not only making it clear what she had done, leaving Jadis to rush off in a panic, but also paying homage to her late father. If there was any hope she might appear in the upcoming movies, unless it’s via flashbacks, those hopes have been dashed.

6. The Characters Could Cross Paths With Michonne

Fans point out that with the characters leaving on a mission to head to Portland and warn the other community that the CRM is out to harm, not help them, it’s a likely possibility that they could cross paths with Michonne. The last she was seen, she learned Rick might still be alive and set out to try and find him.

Fans might recall that, along her journey, Michonne was traveling between Virginia and New Jersey when she ran into a large group of people heading north. That isn’t far from the CRM head, which was in Philadelphia, or Cornell in Ithaca. This group could be the one that included Iris, Elton, Asha, and the others from Portland.

5. Elizabeth Is In Jail

Fans always predicted that Elizabeth would get her comeuppance by the end. The most annoying thing about Elizabeth from The Walking Dead: World Beyond was her insistence on justifying cruel actions. But it was assumed by many that she would die. In the end, however, Elizabeth was used as the fall woman for the attack that occurred on the CRM. She was blamed for bringing Hope, Iris, and the others back to the base in the first place.

By the end, Elizabeth had a worse outcome than death: she lost her daughter, her power, and was locked up in the very place she once led.

4. Jadis Is In Charge

Jadis knows her way around leading a group, which she had done since the Junkyard. She found her way in by bringing Rick to the CRM. She had presumably been helping them by secretly sending all kinds of people there for many years prior to that.

She demonstrated her great instinct for reading people and found a way to dethrone Elizabeth and become a new leader of sorts that those at the very top could trust to run things.

3. There Was A Reveal About How The Outbreak Started

While some fans felt the after-credits scene of Walking Dead: World Beyond was not the place to reveal the origins of the outbreak – why not do that at the end of the high-profile original series, which will finish in 2022? Nonetheless, it was a huge reveal.

Dr. Edwin Jenner, the man from the CDC who first whispered to Rick Grimes in the original that everyone has the virus, returned in video form on a virtual call with a woman at a lab in France. She listened to him talking while a gunman approached and prodded her about what team she was with. But most importantly, he said “you started this,” implying the virus began as part of lab research.

2, The Virus Could Be Mutating

Viruses tend to mutate, and the end credits scene suggests that it might very well be happening with the virus that caused the outbreak in the first place. Dr. Jenner is heard on video saying something about “variant cohorts” that he hadn’t yet seen in the U.S.

This stands to reason, then, that there could be a different strain of undead in other locations around the world. This theory is further solidified when, after being shot in the head by the gunman, the French doctor reanimates and goes straight for the door, banging and pounding with a strength that hadn’t yet been seen from walkers.

Fans were hoping Rick, who transformed a lot over the years on The Walking Dead, might make a cameo of some kind in the final episode, which could lead up to his reappearance in the upcoming movies. When he was last seen in The Walking Dead, he was whisked off to safety in a helicopter by Jadis.

Jadis alludes to someone she brought into the CRM that gained her favor and helped her secure her high-ranking position, which is most likely Rick. She also notes that she lied about him being a “B” instead of an “A” since the “As” are the ones that CRM wants to lock up and study. However, Rick was never seen. 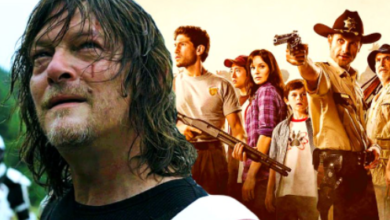 Has Fear The Walking Dead Made Morgan… Evil? 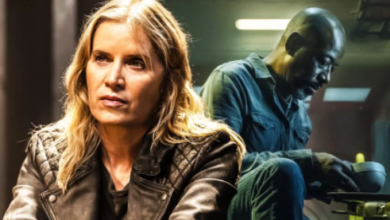 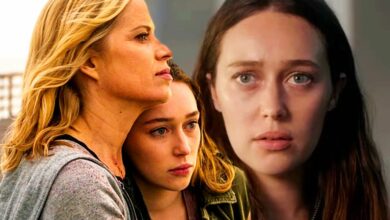