Lifting its title from Interpol’s most-wanted list, “Dodgeball” director Rawson Marshall Thurber’s twisty treasure-hunt lark “Red Notice” blurs the lines between good guys and bad guys, and instead focuses on which of two notorious art thieves is better at breaking the law: sarcastic master forger Nolan Booth (a reliably whiny Ryan Reynolds) or his upscale nemesis, known only as “the Bishop” (a more wine-and-diney Gal Gadot).

Their goal is to collect three ornamental orbs — worth some $300 million, but only as a set — originally gifted from Anthony to Cleopatra, then scattered to the corners of the globe. While Booth and the Bishop ricochet around the world, engaging in what amounts to a high-stakes Easter egg hunt, criminal profiler John Hartley (Dwayne Johnson) tries to bring them in, making for a fun, fast-paced and frequently amusing divertissement. Produced by Universal, then sold off to Netflix for a hybrid release (in theaters Nov. 5, then streaming for subscribers a week later), “Red Notice” works surprisingly well for what it is.

The script, which Thurber wrote himself, sets off blazing, as Booth steals Cleopatra’s first egg, narrowly escaping Hartley’s clutches, only to be apprehended when he arrives home in another hemisphere. Then the Bishop pops up, swipes the recovered prize, and lands Hartley in hot water, since the Interpol agent in charge, Inspector Das (Ritu Arya), now suspects the former FBI profiler of snagging it himself. Next thing Hartley knows, he’s sharing a cell with Booth in some remote Russian prison.

We’re squarely in ’80s and ’90s action-movie territory here, and Thurber (who took improbability to new heights with the Rock-starring “Skyscraper”) certainly knows how to deliver wild and well-choreographed fights, chases and other stunt-driven set-pieces. Take that first heist, when Booth runs through the museum, only to find himself cornered in a room with a giant metal scaffold, which he proceeds to unhook one pin at a time, until the whole thing comes crashing down. In so doing, Reynolds nimbly outwits his pursuers the way Jackie Chan might have back in the day.

The influence of Indiana Jones is undeniable on Thurber’s splashy travelogue, which also channels retro favorites like James Cameron’s “True Lies” (including a sexy tango in which a big lug in a tuxedo — Johnson, not Schwarzenegger, in this case — makes himself irresponsibly conspicuous while undercover). Even more fun than the retro action is the old-fashioned dynamic between these three wary frenemies, who must cautiously agree to work together in order to locate all of Cleopatra’s eggs. There’s an unmistakable screwball-comedy quality to the repartee, as unlikely partners Booth and Hartley bicker, or anytime the Bishop shows up and upstages the other two.

It’s been widely reported that on the “Deadpool” movies, Reynolds improvises (or otherwise comes prepared with) many of his jokes, and the snarky thief he plays here feels like an extension of other irreverent cut-ups he’s embodied before. Naturally, that attitude ruptures whatever reality audiences are supposed to buy into, but it’s worth it, since his zingers so often land (e.g. describing a target’s always-watching, always-listening security as “kinda like Alexa with guns,” or tussling with Johnson, then dropping a perfectly timed, “This is such a confusing erection”).

Reynolds is one of the few contemporary leading men who can consistently get away with winking at the audience throughout a performance. Nearly everyone else in Hollywood is expected to act, or at least pretend to disappear into character. Along the same lines, no one buys Johnson as a mild-mannered FBI profiler (when Das tells him he doesn’t look the part, he responds with an appropriately weary “I get that a lot”), but it’s satisfying to suspend disbelief and see what the Rock will do with the role. Meanwhile, Gadot, who was propelled to A-list status by “Wonder Woman” just a few years ago, gets to demonstrate that she has a sense of humor, too, as the Bishop teases and torments the other two.

Her nickname hails from chess, though watching “Red Notice” feels more like a really good game of checkers, where the players keep things lively by jumping several of their opponent’s pieces in a single turn. These three are constantly out-smarting one another, such that Cleopatra’s eggs change hands often, while cuffs frequently bind the wrong wrists. Booth and Hartley are stuck together enough that they have no choice but to try getting along, as the now-framed fed breaks countless laws in order to clear his name, while a bromance slowly builds between them.

Thurber has a peculiar take on the morality of all this art theft. The first heist takes place in an art museum, but the next two are presented as essentially victimless crimes. The second egg belongs to a notorious arms dealer named Sotto Voce (Chris Diamantopoulos), while the third is stashed away in a secret Nazi bunker packed with stolen artifacts, so they’re essentially fair game. “Look for a box that says ‘MacGuffin,’” quips Reynolds, citing Hitchcock’s term for the otherwise-unimportant plot device that motivates a thriller. Once reunited, these three eggs don’t conjure some all-powerful laser beam from the sky (thank goodness, as that’s an even more tired cliché), but instead serve as the ultimate wedding present to a profligate billionaire’s spoiled daughter — and there’s a second surprise waiting to upstage the gift once the time comes.

It’s all reasonably clever, just so long as you don’t scrutinize it too closely. “Red Notice” could be Thurber’s spin on “National Treasure,” with just as much DNA from the RKO classic “Gunga Din.” The writer-director proves plenty adept at coming up with excuses for these characters to infiltrate and escape elaborately protected locations, and though the movie relies a bit too much on cumbersome exposition (the film’s first minutes are some of the clunkiest the genre has ever seen), it moves quickly enough that most audiences won’t stumble into — or even stop to question — the plot’s many holes. Like a skilled con artist, the movie steals your time, but leaves you feeling like you got the more advantageous end of the deal. 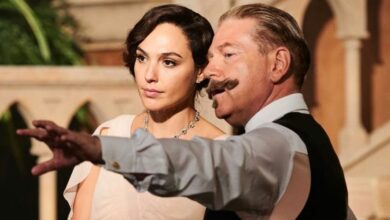 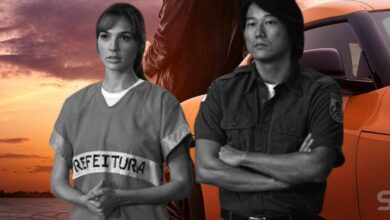 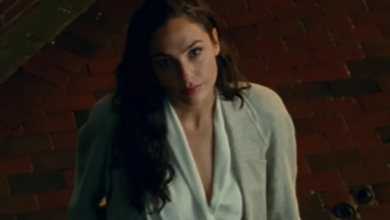 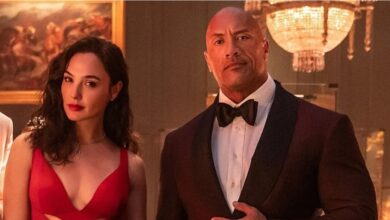 ‘Who’s Gonna Mess with Dwayne Johnson?’: Gal Gadot Once Opened Up on The Rock’s “Unarmed Robbery”